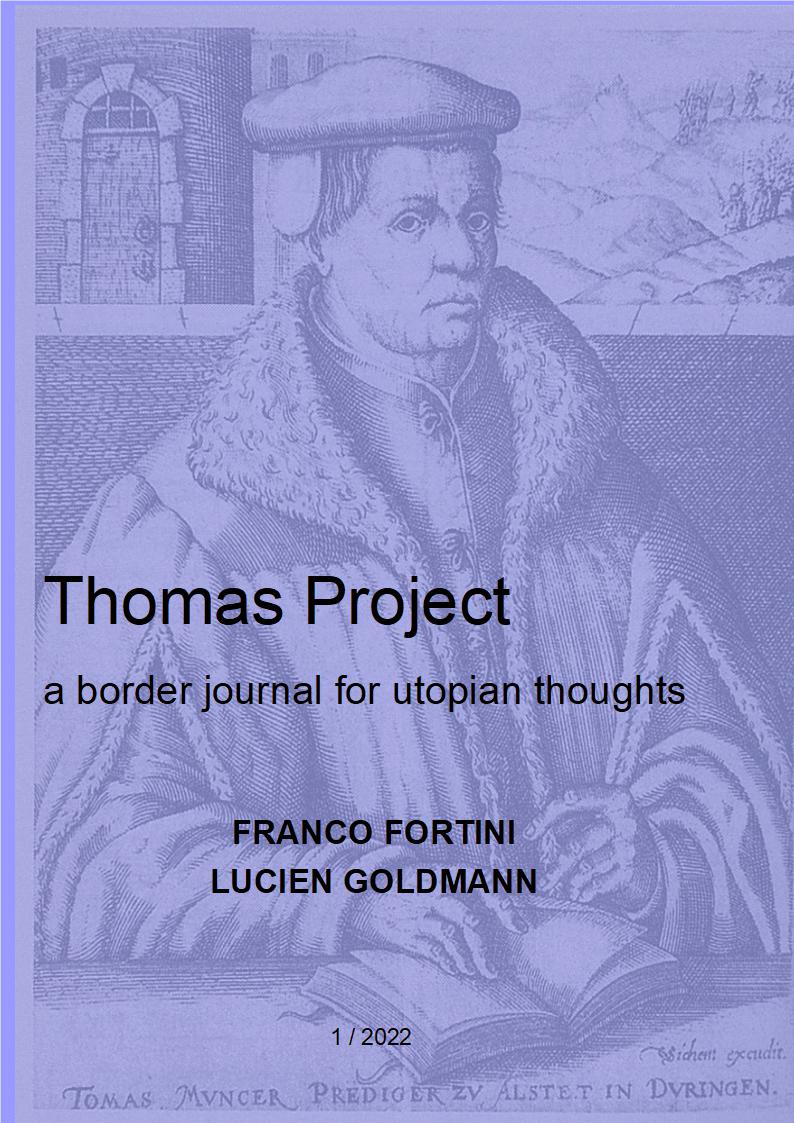 Submission of the articles: 31th October 2021

Lucien Goldmann (1913-1970) and Franco Fortini (1917-1994) were, without a doubt, intellectuals of a different kind, in terms of temperament, inclination and professional activity. The Italian was a poet, translator, literary critic and theorist, journalist, essayist and one of the most renown polemicists of his time. The French-Romanian thinker followed a more linear path, mainly pursuing, in his mature years at least, philosophy and cultural sociology. The memories shared by Herbert Marcuse, among others, paint a picture of a quiet and soft spokenman, far from the image of an intellectual fighter usually associated with Fortini. Nevertheless, both these characters, in different contexts, were protagonists of fiery intellectual battles, in the name of a renewed Marxism and humanism.

In 1956, the publisher Gallimard printed Le dieu cache, Goldmann’s masterpiece, devoted to a Marxist analysis of Blaise Pascal’s tragic thinking, Jansenism, and Jean Racine’s theatrical work. A few years later, in 1961, Luciano Amodio and Franco Fortini completed an Italian translation. From that point on, Goldmann became are curring reference in Fortini’s writings. This is not a coincidence; both authors were, in away, intellectually indebted to Gyorgy Lukács’s earliest writing, most obviously History and class consciousness, but also his Pre-Marxist works such as Theory of Novel and Soul and Form. During the 1960’s, Goldmann’s writing served as the channel through which the Hungarian philosopher’s early works were spread around Europe, France in particular. This was, without a doubt, one of the reasons for Fortini’s interest in the original Hegelian-Marxist socio-philosophy that the Romanian author named – paying tribute to Jean Piaget – genetic structuralism, well before the term “structuralism” emerged with another meaning and before Pierre Bourdieu’s reappraisal of the subject.

Other fundamental affinities suggest the two authors’ connection. Only four years separate their birth dates. They share a Jewish origin, albeit in different national contexts (Italy and Romania in the 1910’s). And both faced the tragedy of antisemitism, albeit in differing circumstances. When France capitulated to Hitler, Goldmann was living in Paris. He fled first to the south of France, eventually finding shelter in Switzerland. Ironically, Franco Fortini was also forced to escape to Switzerland, as a consequence of Italian racial laws. The Swiss period was crucial for Fortini as well for Goldamnn, who came across Lukács’ oeuvre (in a refugee camp) and met Piaget (who would later tutor his dissertation).

If Fortini processes his Jewish origin in different writings (for instance I cani del Sinai), Goldmann mainly avoids the subject (with the exception of his small essay about Chagall). Nonetheless, it would be difficult to conclude that his critique of tragic thinking, in the name of an Utopian wager on socialism, was not somehow influenced by his militant past in left-wing, Zionist groups, such as Ha-shomer ha-Tsair, back in Romania. This consideration of Marxism as a secular faith, this form of socialist religiosity, certainly counts as one of the major affinities between him and Fortini, who was, among other things, the Italian translator of La pesanteur et la grace and L’enrachinment by Simone Weil and who always relate his thought to a messianic interrogation. In this sense, it might be possible to associate both these intellectuals to that vast and diverse current that Michel Löwy – one of the most renowned pupils of Goldmann – defined with the expression “heterodox Jews”.

Certainly, another subject uniting the authors’ work is the leading role they assign to literature and its connection with politics. Fortini is not only represented by his academic career and his role as a protagonist of twentieth-century Italy’s literary world, but also, more than anything, by his great number of articles and essays. For Goldmann’s part, one must consider not only his oft-referenced Pour une sociologie du roman but also, as much if not more, his essays on the theater of Jean Genet and Witold Marian Gombrowicz. Fortini’s theoretical work is clearly summarized in Verifica dei poteri – one of the most influential works of post-war Italian literary critique – and in the essays from Questionidi frontiera, not to mention numerous contributions published during the course of his eclectic career.

We could go on indefinitely, as the points of contact between the two authors multiply, deepening our knowledge of their personalities: both against Stalin from the start; both deeply interested in Emmanuel Mounier’s philosophy, and french personalism in general; both somehow marked by the reading of Goethe’s Faust; both critical observers of the literary and philosophical tendencies of their time, often with persistent and contrarian attitudes; both passionate about the theme of tragedy, but also in paradox and contradiction, seen as the foundational elements of a Marxist philosophical anthropology .For these reasons, we regard it as key to rediscover these two personalities, partially obliterated by contemporary cultural debate, and we believe in the necessity of doing so through juxtaposition.

Following the editorial rules of the review, we will consider with particular interest all contributions that try to put the two authors in relation, elucidating parallels, common reflections and connections. Pieces concerning only one of the two authors will also be welcome, if they offer original insight – in particular articles about Goldmann’s Italian reception, with a special regard to personalities such as Luciano Amodio and Augusto Del Noce. We will also accept pieces on the French and international reception of Fortini’s work. Finally, we will consider articles with historical perspectives, recalling debates that involved the two authors as protagonists or relevant participants, such as that about humanism, for Goldmann, or the debate that blossomed around the Italian leftist newspaper Il Manifesto, for Fortini.

All the contributions will be subjected to double-blind peer review.

Proposals can be written in ​Italian, Portuguese, English, Spanish and French​.